Snow day and an art project

It is snowing here.  Well, not right this second, but it has been for the last couple of days and it will be again in a few seconds.  It also happens to be Liz's 41st birthday.  We had a dinner out planned for tonight at a very special little restaurant that serves her very favorite fried chicken, garlic mashed potatoes and greens.  It is very popular here and even on this bitterly cold night with about 6" of snow we know that there will be a line at the door at least a 1/2 hr. before opening so we opted for breakfast out instead.  Neither of us wants to wait in blowing freezing snow to eat dinner with frozen toes.  We'll save it for later in the week when the snow has melted.

A nice warm breakfast at our neighborhood place was good and fun and Neil Young and Fleetwood Mac were playing as we reminisced about our lives and when these particular sounds backdropped them.  It is an amazing thing when your daughter becomes your friend.  It is a loose thing too, the mother/daughter relationship.  Falling in and out of leading and following and teaching and learning is the norm for both of us these days, but I can truthfully say that we are friends more than not - and we've earned it - so that makes it even more special. 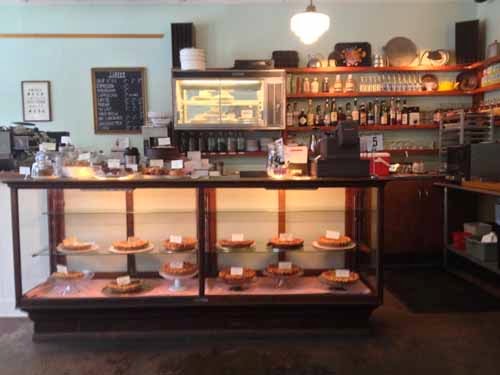 Just look at those pies.  Liz picked blackberry/raspberry.  Our neighborhood cozy spot - Loretta Jean's - they serve a lot of pie here, everything handmade.  That little sign to the left of the photo on the wall says :  " Smoke Weed - Listen to Neil Young - Split Wood " .  The best kind of place to have a cozy breakfast on a snowy morning.

I put out bread and and snatched red berries from the funny little bush in my back yard for the birds.

It really worries me - where do they go?  How do they stay warm?  They couldn't reach the branches of the bush anymore, they'd eaten all the berries off the lower ones, but they're not humming birds so they can't hover to pick the ones up high.  Oh my god, humming birds.  Where do they go?? 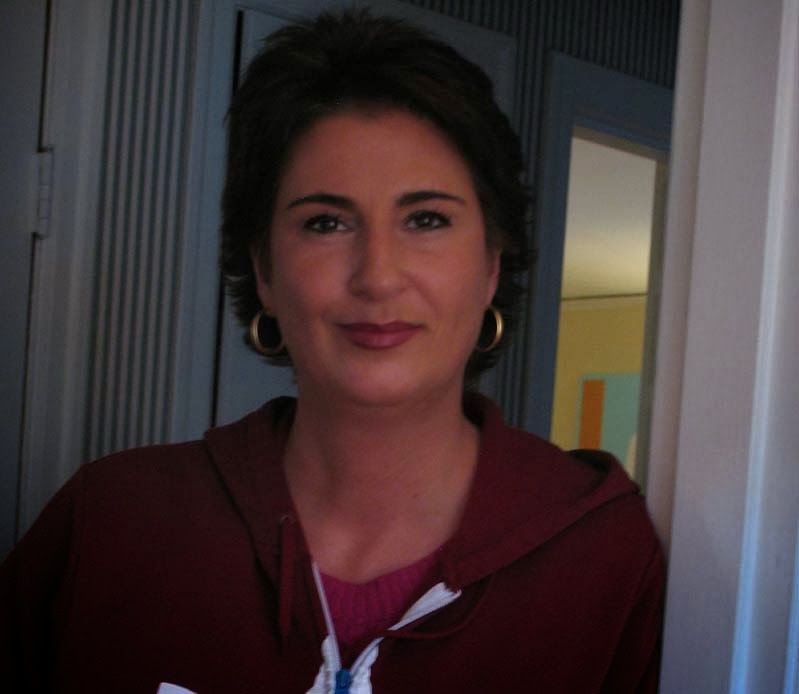 The birthday day girl has now gone down to "Tom's" (she has 4 wheel drive) to meet  Tony.  Tom's is another neighborhood spot, they have pool tables and the best Gyros in town (they're Greek, so you know it's good stuff).  Liz has been going there since she was a teenage and had her own money and time and power to do as she pleased.  They all know her and love her there.  She made a new friend recently when she was on a late night "Tom's run".  They kind of thing you do when the world has not been particularly nice to you and something warm served by people who are happy to see your face, just hits the spot.  This older Italian man came up to her and said " I see you here a lot.  Everybody like you.  You pretty.  You wanna play pool?"........ my imitation of a thick Italian accent, sorry.   So of course, my daughter, who just happens to be a damn hot pool player, said "Yeah, sure." and beat him 3 out of  4 games.  He now respects her, not only for her pool prowess, but also because they crack each other up (have I told you she is hysterical) and calls once in awhile to say "You wanna play?"  So, it's her birthday, she goes to play and that is fine with me.

Tony just happens to live a couple of blocks from us.  He's a long time immigrant, hence the accent, but made a good life for himself, his wife and his 3 kids here in Ptown for the last 40 years.  He wife has passed away a few years ago so now he gets lonely and thinks that Liz is the best thing to happen to him in a long time.  He is 72 and I think he likes Liz better than his own kids.  And no, I'm not naive.  There really is nothing more than a pals thing there and I am so glad for Liz that she has always been able to make friends like this.  Just happy times and lots of laughs.  She really is amazing, in so many ways.

Me, I've been playing with artzy-fartzy stuff.  I collect all these odds and ends of stuff and then put them together to make other stuff.....just what the world needs. 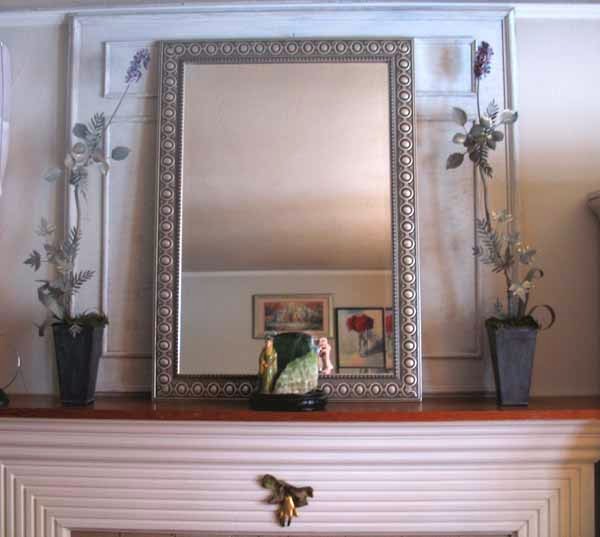 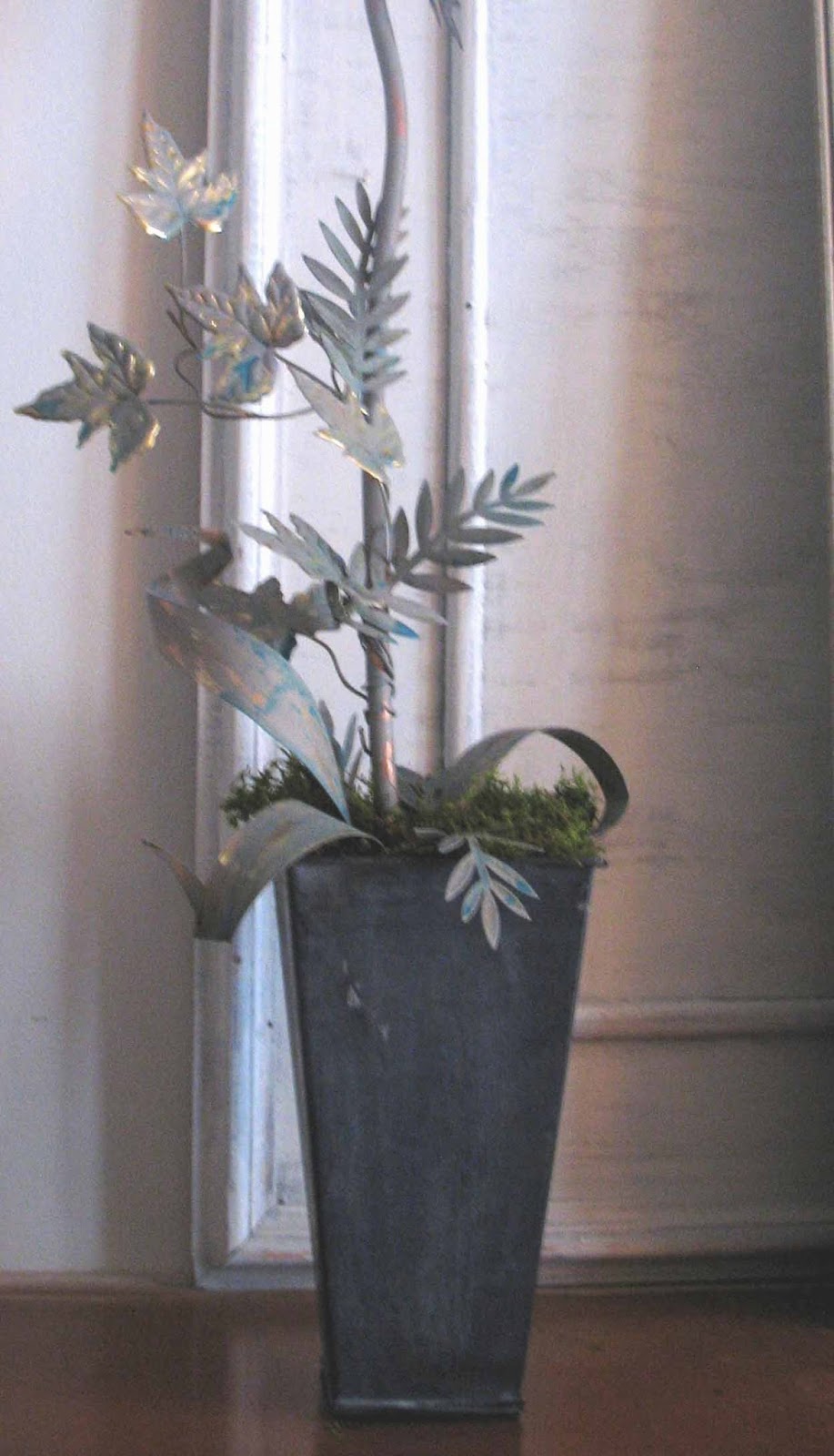 In France in the 1800's there used to be craftspeople who made fanciful bouquets out of metal for the wealthy so that they could have flowers in their homes all year round.  This po' girl likes that kind of crazy stuff, but since the antique ones that have survived  are only within reach of very moneyfied decorators and their buddies, I decided to make a pair for my self out of all the goofy little metal flower pieces that I find at thrift stores and such.  This pair is made out of an old copper heating pipe and a '70's sculpture thing that was not very important on it's own and other little branchy thing a ma jigs.  The flowers at the top are actually enameled lavender, but my cheap camera can not pick that up.  But they were fun to do and I love the way they look kind of crazy/funny up there on the mantel, as if they are struggling to find the light - aren't we all?  My daughter likes them too, which is very unusual as she is a minimalist.....but maybe I'm rubbing off on her. Not a chance!  But still, it pleases me that she enjoys them.

So anyway, that's what's been going on around here.  Hope you all are warm and cozy wherever you are tonight.