I'm taking a break from painting, I stand to draw and paint and my back gets really tired after a while.   Actually I've only done the under drawing. For me, it takes about 2 hrs to get an under drawing balanced.  (I've still not moved on to abstract yet) But it's turned out good and now I'm contemplating colors.

So I'm taking a break and sitting down and low and behold, here is the keyboard. I've picked the radiation story to tell. God, I am slow at posting.

After the lumpectomy and the ensuing lymph node surgery, which is actually much worse, they put a draining tube in your arm for fluid that might accumulate - it's really gross - but the worst part is that that tube has to stay in for about 5 days and it actually grows scar tissue around it in that short amount of time. They don't give you an anesthetic when they take rip it out of your arm. It hurts like Hell! I actually screamed. It was the worst part of the whole ordeal.
After all of that is over, then you get radiation, 6 weeks, 5 days a week. I don't really know why it takes so long, because my tumor was very small, but that's the way it was. I have never experienced much in the way of side effects.Actually, for me, radiation is not so bad. Well, except for the part where it kills a whole bunch of cells you don't really want to get rid of.  You get to park in a lot reserved for oncology patients. The lot has a machine at the entrance and you have to put your special code in so that all the podiatry patients don't park there. 3 to 4 out of 5 days, I couldn't get my code in. I just could not hit the right buttons, so I'd have to call the nurse on the little speaker thing and ask for help. They can do it from inside, but every time there is a big sigh on the other end of the line. My brain just doesn't work when I am under a lot of stress. I get really disoriented.

You go in and change and have to sit in the waiting room .... with no bra under your gown, and a lot of women bring their husbands, just a wee bit uncomfortable.  When your name is called, you go into a large room that has an enormous machine. 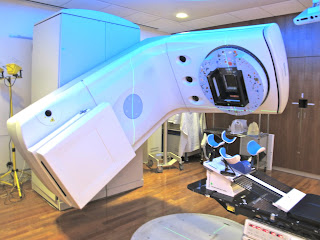 It feels a bit Star Treky.  You get tattooed so that they know exactly were the beam is going to hit. The lights go out except for the one that is in the machine. It swivels around so that the big round thing is on top of you and as it does it makes this quiet sound, very Star Treky again. But it's actually kind of soothing. At my hospital there is a big picture of the galaxy on the ceiling and a soft light that illuminates it. It's very warm in the room and the whole things feels rather like a cocoon. I felt very safe and relaxed in there.

Here is the interesting part. As soon as the light went out and the soft noise of the machine began, I would close my eyes and see a very clear vision of a couch floating over my head. At one end sat a little bare footed girl and at the other, a woman. She looked very calm and centered, for lack of a better word, and they both were wearing lovely dresses.  Each day I would completely forget that this was going to happen. I swear, every single day I would be surprised when the vision came up.You wouldn't think that was possible because it happened every day, but as I said, things become very disorienting as you weave your way through this process. Each day the woman would turn and smile at the little girl who was not having any of that. She wasn't mad or shy, she just didn't trust even the kind faced woman at the other end of the couch.  Day by day the woman would gently beckon the little girl to scoot over towards her. She would smile and nod her head that it was ok and sometimes she would reach across and tickle the girls feet. We had six weeks to go, so this was a long, drawn out process, but slowly, slowly the gap would get shorter. The little girl began to relax a bit at about the midway point, but she never let that guard go all the way down and she never gave up. Again, incredibly, I forgot every, every day that this was going to happen. But when it did there would be a fraction of a second of surprise and enjoyment as it popped up. I don't think the beam lasted more than 4 minutes, if even that, so the whole of this little play carried out in that short amount of time. But it didn't feel short.

I'm sure you can guess the outcome of this story, but here's the twist. On the very last day, predictably, the little girl made it to within a couple of inchs of the woman who was smiling with a smile that said "yes, we got it!". She reached down for her, the child didn't resist, but just as she got her in midair over her lap....bing. The whole thing was over. The machine was done for the last time and the lights came on. The image of her hovering just above the woman's lap is not troubling. Everything was so calm and the experience was like those hours when you are painting and you loose all awareness of your surroundings. What happened at the end, was just the way it happened.

I don't want to put too much into it and the whole "inner child" thing doesn't seem quite right to me. Been there, done that. It feels cliched. What I took away was that it's never over. Nothing is ever over. And nothing is easy. We are always a little thing working towards benevolence never quite knowing if we're safe or not, never really knowing if it's ok to surrender to the process. We get pretty close, we can even get damn close, but it is perfectly ok if we are near. Near is good and I am quite happy with that and very, very happy that benevolence never gives up on us.