Art show on a quiet afternoon


I tried to post this yesterday and I just could not get the pictures to turn out right.  I adjusted and adjusted and every time they came out divided down the center with only one half showing.  Lowered pixels, changed size, moved location, didn't solve the problem.  So I'm just going to put it up anyway.  If it works , YAY, If it doesn't - well, try to click on the picture itself and see if it comes up better in the slide show thing. Otherwise, it is all Bloggers fault....    Yes, when I clicked on them just now it went to slide show and full size.

This is what I've been up to lately in the studio.  Lots of fun !  I'm not religious nor even that particularly spiritual, but once that Catholic art thing gets in you - it's in you.  Many years of Latin choir singing ( listening) and all that beauty of the old churches, which is pretty much completely gone now is still a big influence to me.  This work is also very influenced by the Spanish Retablo, but in no way attempts to be authentic as I am not Spanish of course.  But I am drawn to their naive and elegant work. It is not, as well necessarily about Mary in a blessed way, although that's ok.  There's a lot there in the religious belief that is beyond my scope of plausibility, but I do say the Hail Mary to put myself to sleep at night - I leave out the bit about "fruit of thy .... ".  But just the thought of a woman in charge is comforting.

I work a lot in the art of collage - in a pretty refined sense, although I respect the randomness of other people's spontaneous way of using it.

I've collected cuttings for about 20 years - Have 25 boxes of them in various subjects.  It's actually the first art I did as a child, cutting out pictures from magazines especially if they were pictures of the Beatles.  Then I'd splash them all over my walls.  My family did not promote my hobby as it was deemed silly and revealed a leaning toward fantasy that was not welcomed in a house too filled with, well, other things. But now I get to do whatever I want to do, so ha! to all of that.
Anyway, this piece took about 2 months to complete from the initial concept to design to assemblage.  After design follows weeks of hunting through 25 boxes of collection - by theme - selecting (not an easy task),  reproducing, adjusting size, and color and then a whole lot of cutting and then pasting.  I enjoy the minute detail of cutting and it's a challenge to get even the tiniest aspect, fingers especially, cut without screwing it all up and having to start over, so if you get it right it's a really nice feeling.  This is 100% paper.  The back drop is paper painted to look like canvas - whoa - that was an exciting challenge.  It is also a challenge to know when a piece is done.  I think I'm done with this one.  It will have a trim around the outside edges just to make it feel clean to the eye. But essentially I am finished. I will do a series of them, six maybe eight.  My next will be an ethnic theme and I am really looking forward to doing that.  It's very difficult to find old art with good representations of Black, Asian or Indian women.  And by the way, I strive to use only images that are antique and therefore free of any copyright infringement - I apologize if I've failed, which is inevitable. I guess I've tooted my own horn here, but it's taken me almost three years to get back to doing art and I'm proud of myself for finding my way back in.

This piece is 48" by 24". I start out big but will go smaller as I relax into it.  Big gives courage. It has a tentative title of "Under Thy Protection" (because like I said, we're - women - really in charge) but just like the process of creating the work itself, giving a title is also a process.  My goal here was to speak to the sanctity of Women.  To say that all are divine in their wisdom, compassion and grace.  Obviously women are too often neglected as to the importance of their role and the gift that they bring. And I am also particularly influenced by these gifts as expressed by the women I read who write the blogs I love.  Thank you ladies.

I'm trying to give you close up of some of the details - but I have the worst two cameras in the world - never a good enough focus.  But, someday. 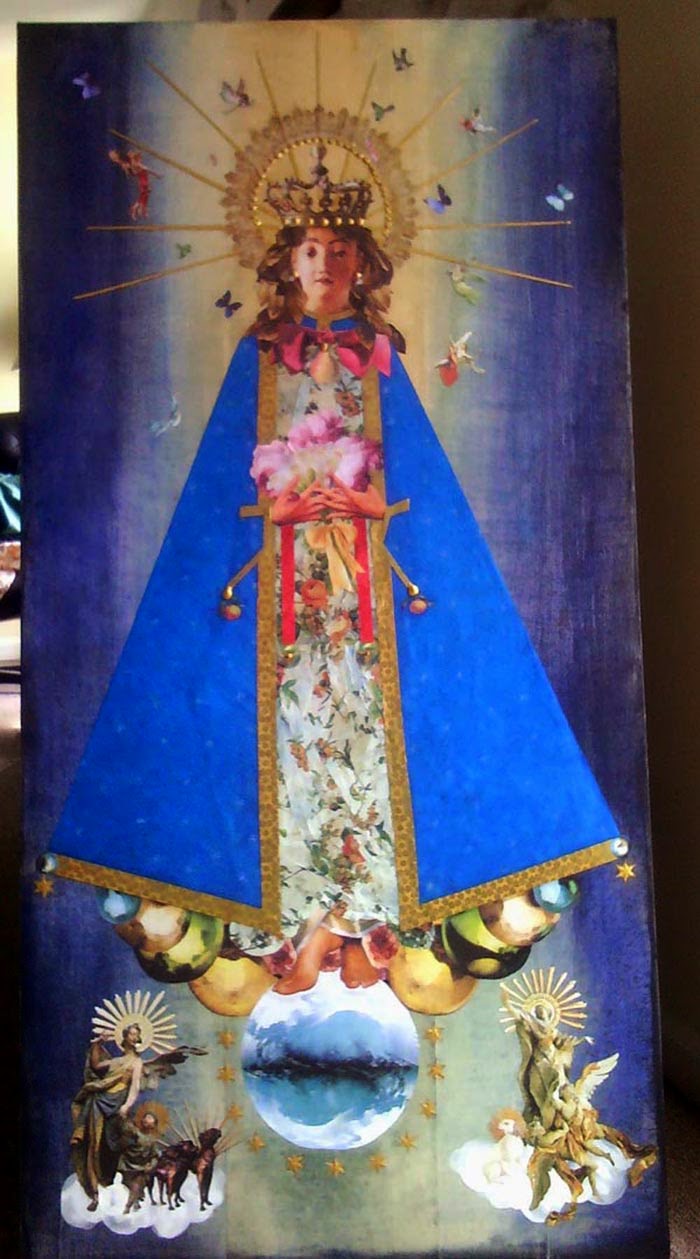 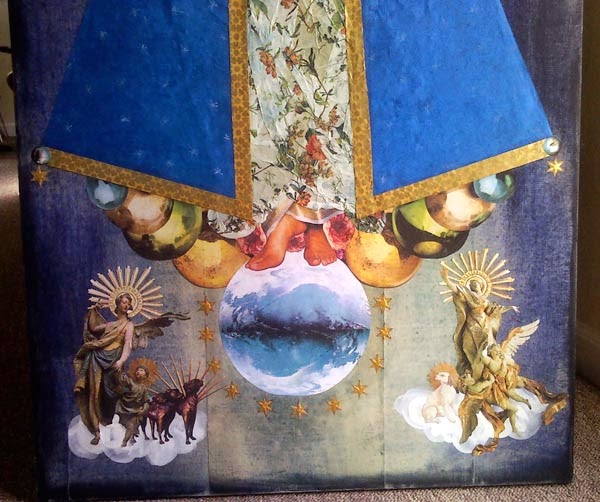 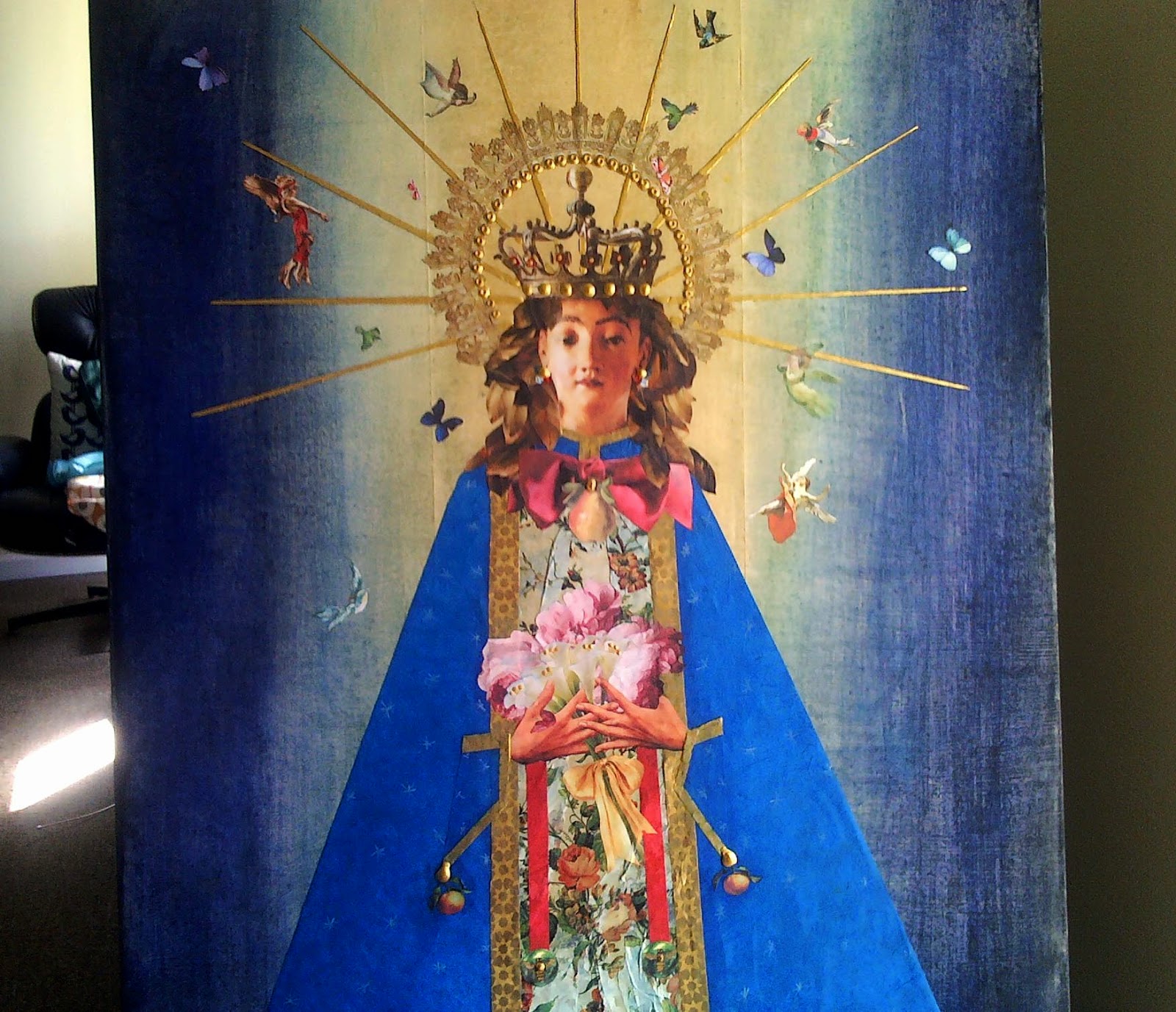 Thanks.  I'm going to try to write more.  I think I can do that too.