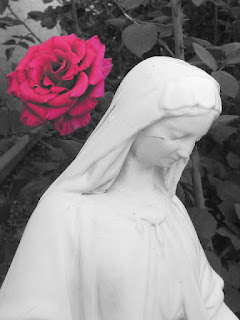 Friday is the one year anniversary of my Mother's death.  As you know from reading my post of April 30th, it was a hard day.  She died here in my dining room, void of it's furniture save only for the beige metal bed that raised and lowered her according to need. There was a small dim light beside her.  I had been holding her hand, exhausted in that very late and dark hour.  I had just let go and walked to the far, far end of the room to rest on the couch for a bit.  She was asleep and I needed a spot of that myself in order to return with proper attention.

I closed my eyes and then turned to check on her after what seemed like only a minute to see those last two breaths.  They came hard, not like the soft surrender that I had imagined.  They came almost violently and I was so shocked that I didn't immediately know what they were.  One of the hospice nurse's had said that sometimes holding the hand of someone who is passing may keep them lingering.  They really don't want to "let go"until they know that you have let go.  I think she needed me to let go.

She was finally buried last month on August 26th.  Her ashes had sat on a shelf in the place where they keep ashes that are not buried - there is a place for that - almost a year.  I had suggested several dates to the other three, I don't know why that was my job, but all had been rejected by the other three for various reasons.  August 30 was my last effort, her birthday.  Still various reasons, so the 26th was as near as we were going to get. You just can't fight every battle.

I accidentally locked her flowers and her poem and my Father's flowers in my car, he's buried on the other side of the cemetery.  I was distraught.  You can imagine.  She had waited a year and I wanted to let her know, properly, she had not been forgotten. I wanted to let him know as well that he had not been forgotten either and to take comfort in knowing that he also had been forgiven. I wanted a ceremony, a ritual of some sort.      There was no waiting. For various reasons the other three siblings  could not wait. They told me the drivers schedule could not wait, the gave diggers could not wait the professional carrier of ashes could not wait, I wanted to wait.  Wait for me, wait for her. My heart was in a grip that was squeezing the air out of me.  I needed her to know.

Was the locking out about her? Was the locking about a mourning family standing by, not standing by, the one who has brought ceremony?  I believe in the whole "there's a reason" thing.  It's walked into my life too many times to scoff.  I'm trying really hard to forgive.  To let go. My anger is only a burden to me, that's not trite.  And it's late in life, I need to lighten my load.  Maybe the locking out was for me, to practice, practice the peace making act of forgiveness.   I know her well enough to know that's what she would want me to do. At the end, for her, forgiveness and forgiving were all that was left to do and she was determined to finish well.  I was determined too - we did a good job, together.  Even so, had she been there, she would have chosen the schedules of others too, over the emotion of ceremony, the need for requiem  --  over my needs.  She was who she was. I struggle to learn from that. To learn to stand with the one who matters to me and not put others before her. I can't control the other three, I can barely control myself.  And I am no judge, although I struggle against that and so many other things.  I want to change that thinking for them - but it's not my place. God, how I want to change that thinking.

I went with the three siblings, I hardly know them any more, and the driver who led us there with the important schedule, and the grave digger with the important schedule and the professional carrier of ashes with the important schedule.
The silence made a stillness that was pounding in my ears. I mourned the lack of flowers, the lack of words as much as I mourned her. It wasn't a conscience slight on the part of any of them, they meant no disrespect towards our Mother, it was just that it had been a year.  I'm a stubborn bitch, I am.  I stopped the grave digger, one moment could be afforded, and I reached to the mound and scattered my own handful.  I had to be a part of this, bitch that I am.  He struggled to get the well cut turf replaced to invisible, but finally had to remove it and take out a handful of dirt, one small handful.  Sometimes this human life is very hard.

When the unlocker got there - he was quick, bless his heart -- 15 minutes, such a short wait. He got that it was locked....in a cemetery - he got it. So I took my flowers to both, but not the poem.  The poem is still here and I will take it , with flowers to both on Friday, her anniversary.  What an odd word. Will every year be an anniversary?  I guess they last forever.  But this one will be a circle, finally completed, with requiem. I still need it.

And then I will leave for a long drive, much needed, to visit my friend - S.  My dear, lifelong friend, S.  We will have laughter and cooking and Lemon Drops and walking and just plain old loving as only two lifelong friends can do.  And I will forget forgiving - even though I know there was no harm intended by these three that are so different from me, sisters and brothers go the way they each choose to go, but only the long standing habits of a suffering family.   I will forget for three days my ever present practice of forgiving because it is patient, it will wait for me.  Forgiving is in no rush.
Posted by liv at 3:36 PM 10 comments: