I went to see Florence Foster Jenkins (are you supposed to put that in quotes?) yesterday, in the middle of a hot summer day in which I wished I had opportunities to do.....well, a lot of the things that some of y'all fill your summer days with instead of sitting in a dark room. Alone. But that's my life right now so ya' just gotta go forward and live it the best you can.

Sorry, I came here to talk about the movie...sort of.

It starred Meryl Streep and Hugh Grant.  Both of whom were excellent. You know Streep is going to be good, but I was pleasantly surprised at what an authentic and present performance
Grant gave. He's really aged and it makes him seem so much more a man and not the silly boy he's always been.

The theater was surprisingly packed and mostly with women, of a certain age. I didn't notice it initially in the dark.  I'm usually the first at a film so that I can get exactly the seat I want and then watch all the other people coming in and make snap judgements about them. I was late, why doesn't matter. (For once I'm not elaborating.)

I'm not going to explain what the whole story was, but just to say that it was a true story and done pretty close to the actual. She was a woman who had given her all to music, setting up theaters and artist's salons and funding, in many ways, the music scene in Manhattan (?) I don't remember.
Her greatest desire was to sing on stage herself, but she couldn't carry a tune. She tragically had syphilis which impaired her hearing, and brought a lot of other sufferings with it that she endured. And a whole lot of fortitude.  Long story short, she was never really understood or appreciated for what she did, in just about all areas of her life. Except for her husband, who stuck by her even though he knew she never could actually sing. She was very lucky in that way. The look of her, the design of the rooms, her manner, all reminded me of one of my grandmothers (the city one) and made for a melancholy mood.

When the movie was over and the theater had emptied - I always stay until the very last credits, I don't like walking out with the others - a wave of mild astonishment flashed through me.  The room was still about a third full. I'm moving my eyes around without moving my head and I see that, sitting in the same silence I am, are most of these women of a certain age.  Short white hair in tight curls and unfashionable glasses. It was the saddest feeling because I suddenly understood that they were probably remembering, were hurting. That to a certain degree, that was them up on the screen.  Women whose talents, of whatever degree, had not been recognized. That they knew that life had passed them by and they would never get what Florence had longed for - to be seen, to be applauded, if only slightly, for their talent. The kind of silent talent that all women possess. It was an unacknowledged club and I was a member of it. I'm separated from most of them by about 10 years but very often get seen as a daughter because I look unusually young for my age. I'd been crying just a little, for Florence, and it got a little heavier for them. I sat even after they all left because I didn't want to face them, to see what was in their eyes, I knew it for myself and it's hard for me to swallow down to untroubled.

My intention was to drive out afterwords to my grandparents (the other ones, the country ones) old farm in Yamhill, which I already know is decaying, the house and little sheds falling in on themselves. I think it was a bad decision, but it was the plan and I didn't have another.  It's a beautiful drive. It used to be all farm land but now it's disturbingly being engulfed by vineyards. Evidently the world needs a whole lot of Oregon wine. But still it's pretty. 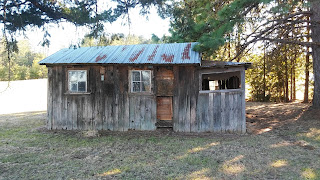 This is the little house my mother and her sister grew up in. The main house only had one bedroom so my grandfather built this sweet little thing for them. That's their porch room on the right. It had a tiny living room with 30's patterned linoleum and white voile curtains (I think they were called "Pricillas) and the window on the left was their bedroom. They had iron beds so close together that you almost had to get out by crawling over the ends, but there was just enough room at the foot of them so that my grandfather could make little built-in fold down desks for them so that they could do their homework there by light from oil lamps. (I think he later installed electricity)  Rose patterned wall paper. I don't know how they heated it, because you can see, no chimney, and of course no water. They walked down the little path to use the bathroom in the house which for some time had no tub. 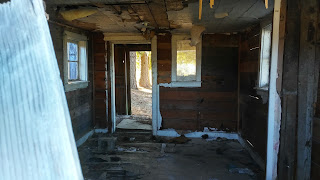 I loved playing in there when I was little, it was like a sunny little doll house. I wish I could have bottled the scent. The wind has swept it all away now.

My grandfather was a man-of-all-trades, a butcher by profession, but he could do anything. 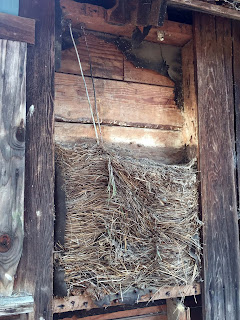 This is the insulation he installed. It is Ponderosa pine needles, laid meticulously, one straight handful on top of the other. It's a work of art in it's self.

I think this grandmother might have felt the same way too. A lot of her talents, very simple but honed to a high skill, were scoffed at, especially by her grandchildren. We thought they were old fashioned and silly, but now I see what an incredible woman she was. And her quiet and unrecognized pride. I could strongly feel the silent resignation of these woman, these brave and skilled and talented women. And that even if the skill and talent weren't there, as it wasn't for Florence, the bravery is something that should be honored. And I felt the weight of the fact that it still goes on.  That simple and heartfelt is still not given the value that it deserves.

I gathered some pears and apples from the knotty trees. They never get eaten. Their perfume sates us for weeks, sitting in a bowl on the kitchen table. It was the smell that greeted you when opening the back door, coming from the cold storage bin. It preserved them well with the absence of heat. That smell made me feel that I had arrived at a place where there was peace. A different world for a few days in the middle of summer. 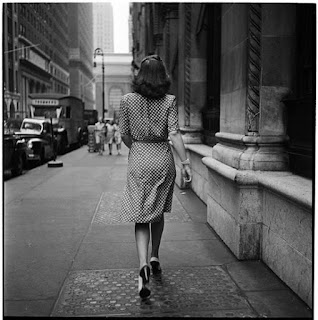 I hopelessly think too much, trying to put it all together, find the sense in it. 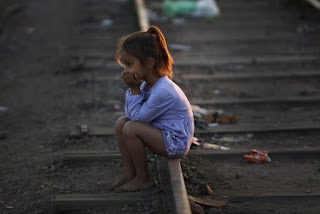 I usually wind up here. I can carry on from here, I'm strong enough to do this now. I keep my head above water. 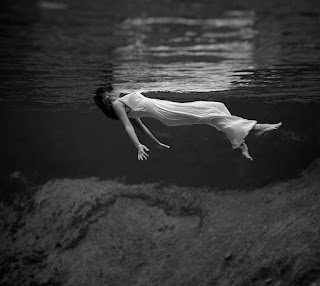 But it's an effort to stay away from here. 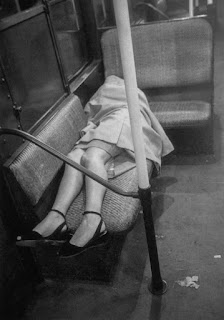 I'm very often like this now, but even so, sometimes looks deceive, sometimes not. 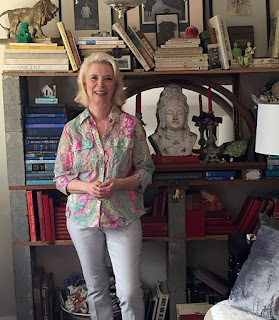 I try to put it in perspective. I try not to drown in the past. I try not to succumb to the crazy stuff happening these days - you know the stuff I mean. Today's a better day. I think it might stay for awhile, 'cause I am one fucking strong woman, just like those women whose simple skills and simple talents are the rock we all stand on, whether we see it or not. So maybe it wasn't such a bad plan after all.