Chapter 3: Cockroaches, the Taj and how to be a drug smuggler (I probably shouldn't say that)

Take this little journey as a break from the taxing captivation of politics.  We all need one.  Everything else is still happening.

Day to day life in the ashram was like living in the best commune ever.  It was a very spiritual environment, well that's what ashrams are, it's not a vacation, sort of... and spirituality is more central to life in India than anywhere else. At least at that time it was. Celibate, vegetarian, no discrimination between the sexes (I do not lie!) and a kindness to each other that was a norm I miss today. And modesty, how I miss that in the United States. We seem to have very little awareness, nor the significance, of modesty anymore.  Just go outside.  And if you ever go to India, bring it with you, it's the least you can do for them.

We were only about a quarter of a mile from the banks of the Ganges. A stroll in the morning or the early evening would lead you to a little embankment where you could squat to bathe or wash clothes. Outside bathing was the only way to get clean, whenever you remembered to do that. It is always done fully clothed, two things for the price of one. However, that didn't stop young Indian men from riding their bikes on the other side of the river and yelling "vagina, penis!" It was laughable and you just shooed them away, they were harmless.  Although that is not the case in cities. In cities you must always watch out for the wandering hand and not so innocent appraisal. It is the same now as it was then. 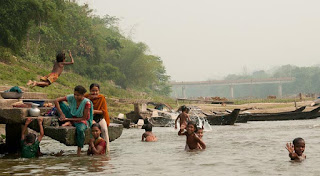 In between daily life and daily life, we took trips, some were just a few of us, see the post of Dec. 24th (links? how do people do that?) and some were en masse, yes, 400 people.  That takes a train. And train travel in India is very different from train travel anywhere else. 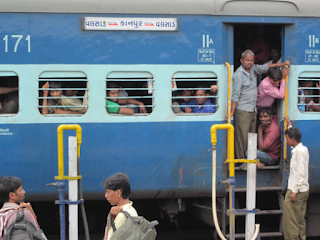 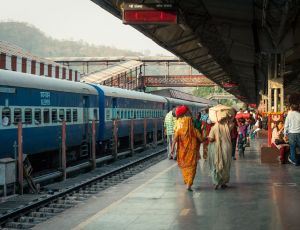 I remember hanging out the open door like that and thinking, "This is the best way to travel by train. Why doesn't every one do this?".  I still think that.  I HATE the way you can't even open a window on a train anymore, it's all piped in air like a plane, it makes my head hurt. But was exhilarating, even when the coal smoke made your face black with a layer of soot.  Bars across windows, no glass, so if the soot didn't get you at the door, it was eventually going to find you. Little stations like this are much more crowded than what you see in the picture, they are chaotic and noisy and the smell of them is intoxicating. There are vendors walking around with big baskets on their heads selling samosas, a deep fried triangular shaped snack filled with spicy potatoes. No Indian restaurant in America comes close. And when you are there, they become addictive. India's comfort food. Chai, made with buffalo milk at little stands on the side of the road, warm samosas and the other worldly smell of bananas. I would go back just for those, if I could. They could sustain me for the rest of my life.

The trains are fun during the day, but freezing cold at night. At night you sleep sitting up, if you are lucky, if not you lay on the floor and take your life in your hands. First you may get stepped on by someone scurrying to the bathroom, a hole in the floor, thankfully with a door. It is the strangest feeling of vertigo watching your pee fly over train tracks at about 50 mph. And if you don't get stepped on, then you will probably encounter face to face the largest cockroaches in the world.  I remember looking down on the floor one night, not able to sleep ( tiny, very dim light bulbs in the ceiling, icy night wind and a hard slatted wooden bench) and with bulging eyes, grabbed my seatmates arm because I saw a mouse.  No, no, no...a cockroach the size of a sizeable mouse, a mama mouse, a pregnant mama mouse.  It was like a scurrying attack creature and I didn't want to know where it was going. All of a sudden I was very, very grateful for the chivalry of some sweet guy asleep on the floor, some guys can sleep anywhere, and hoping he would never know what had just climbed him, like a little mountain, on it's way to someone else. 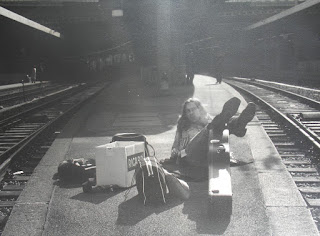 My dear friend Robert, waiting for the next train. This was taken in Delhi in 1970. His stories of India were a lot of the reason I was so eager to go. I'm so glad I saved this picture, he was a wonderful guy and I hope he is still living a happy life.

Dehradun, Patna and Agra were three of our destinations, Agra of course, being the most memorable. There were only about 30 people at the Taj that day, including myself and 4 friends. I remember thinking, when inside that middle part of the building, how small it felt. I threw my arms out and twirled around and around on the marble floor with the wind blowing in through windows that had never known glass and feeling the cool morning breeze.  A turbaned guard tsk,tsk, tsked me. Not becoming behavior for such a sacred place. But sacred behavior for a young free girl. 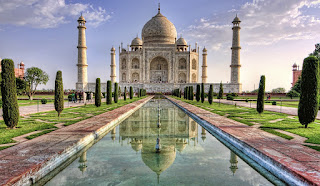 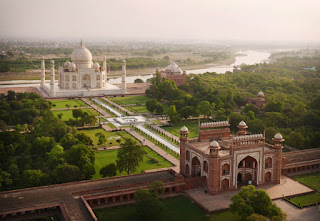 Some time in the late afternoon, two other girls and I snuck into one of the towers in the red mosque laughing and trying to smoke a joint, strictly forbidden. Rebel is just a given part of all young people, no matter what they tell you.  The match would not light, we took that as a message not to taunt the Gods, they were watching. But that doesn't last long and that evening we all went to a tiny, dark cafe, with a couple of NY boys eager for a little of the grit of India. There was a thick blue haze in the room and people were smoking hash and drinking goats milk with a ball of it in the bottom of the glass.  It felt so sinister and the hazed looks in the eyes of the men, all of these places are only for men, on the the faces and bodies of white women who didn't belong there was enough to push you right back out the door. Fast. 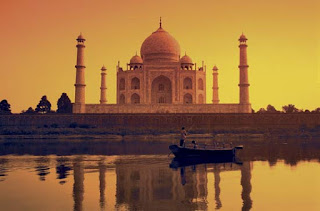 This is the view that was most enchanting to me. I saw a scene very much like this from a window of a train/bus? crossing the Ganges as we were leaving that evening. It is the back of the Taj on the banks of the Jamuna river. There is a very relieving quietness everywhere in India at twilight and the fishermen in their boats heading home brought a gentle reminder of the real lives of India. The lives that Shah Jahan ruled, and probably as most rulers, never understood or even saw.

Not long after these mind blowing/cleansing/revelation filled journeys, it was time to start winding this thing up. We had just enough money to get our asses to Delhi and a cheap hostel.
At that time, hostels were bare cement rooms, more like a prison cell, with cots, two to a cot and a bucket out back that was always overflowing.

What happens next in Delhi; when your stolen ticket isn't any good anymore and carrying drugs out of the country just seems like a nice thing to do for your friend.

The drug thing in the title wasn't just a tease to get you in here...but I think it might have worked a little...  I just didn't realize how much incredible shit happened between there and then. It is still shocking to me what happened in Delhi.  But then maybe not, given that this is India we are talking about here. 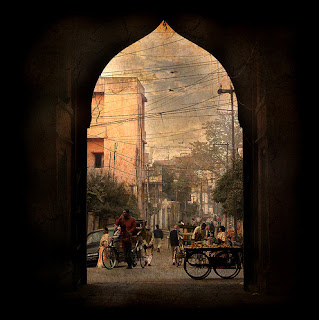 The ending is worth waiting for......