This was my very best Christmas. In a big house on Main street in Tillamook, Oregon everything was beautiful and happy. My grandparent's house was warm and fragrant from the just cut tree and crowded with people who were glad to be there.  I'm sure my mother helped put the "rain" on the tree, she was meticulous and would have wanted to please her new mother in law. The lights were low in the kitchen except for the one over the Tom and Jerry bowl, a special one - children were not allowed but there was another one just for them with tiny cups to fit little hands, and lots of home made cookies and probably a ham. All my aunts and uncles were there. Christmas music would have been playing on the new mahogany cabinet that held the record player which had just replaced the wind up with the brass horn.  My parents were still happily married.

The carpeting in the house had muted roses on a grey background and the wall paper was a soft dove grey with a pattern of white feathers. The brocade drapes would have been drawn over the pale golden shades, the ivory pull dangling from a long string.  Soon my grandfather would have disappeared and my grandmother would say to the children, "What's that noise? I hear something on the roof.", we were sure we heard it too, then the doorbell would ring.  A wide eyed child would rush to open it, letting a burst of cold air in and stepping back in wonder because Santa was there. Little necks would strain looking up in awe and then down to the big, red bag. There were presents under the tree but the best ones were the ones given to waiting hands.

As Santa disappeared, my grandfather came back and began turning all the lights out, except the tree with the big bright bulbs that got too hot for little ones who always wanted to touch. In the too warm and cozy room 4 children would be oohing and ahhing and passing back and forth presents that were so different then.  The wrapping paper, thin and soft, would be strewn in excitement, a cloud enveloping children and baby dolls and wind up train engines. Parents, huddled together, would laugh with each other and watch carefully to see that nothing got left unwrapped, and children were sharing, as children did then. In the glow from the tree, newlyweds, they all were then, exchanged presents and tender smiles. The war had just ended and all my uncles were safely back home, a present for my grandparents.

There was love in that warm and softly lit room and there would be for several years to come. 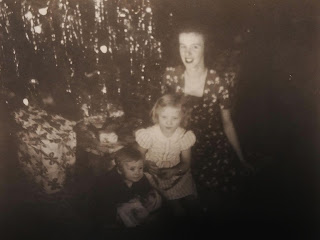 It was 1949.  My pretty mother in her favorite dress, green with pink bows, my aunt, a late surprise to my grandparents - all my uncles grown and married - and my sister with her baby doll. My mother is carrying me, four months in, I would be born in May. There were more Christmases just like this, a few as sweet and loving and gentle and filled with tenderness. But this is the one I remember best, this was the one I loved.