Part two...The criminal journey of the stupidest girl on the planet who finally lands in heaven

Thanks for staying tuned to this channel! We now resume our journey.

Ow, ow, ow, I just want to stick this in here because I just found it on Google. It's the living room of that cottage in that Hollywood Hills enclave that I told you about, last chapter.  My head might be in there....  You could only jam about 60 people in there, jam, summer time, you get the idea.  Seriously!, now that I look closer I am sure! that that is my head in the lower right hand corner! My hair was browner than I initially remembered it.  But I do...truly...remember turning around when someone was taking a picture.  And there couldn't have been very many of them taken at that time.  Me...look! Amazing!!  That is the ONLY photo taken of me in that whole time on that incredible trip! 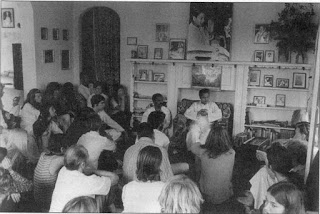 My Guru, as I said, was taking 400 followers back to India with him and if you remember I was not going on that flight, but that one that left about a week later, the illicit and criminal one. (chapter one)  End of August, beginning of September. Dates are fuzzy, a lot of things are fuzzy. There was some smokin' goin' on.....

My illicit flying companions and I went to the airport before their plane left to bid them bon voyage and to join in the festivities of something that was unprecedented for that time. It got a lot of press because I think this was pretty much the beginning of the whole spiritual leader/follower thing.  400 people essentially renting a plane and traipsing after a holy man/kid? 1/2 way around the world.  Yeah, that'll hit the news!
Everybody was gathered around him on his makeshift "throne"..there was always a throne, a whole lota' thrones,  and he was taking questions and just sort of playing the whole thing to the hilt.  After a few rounds, I, unbelievably shy little me, raised my hand and asked a question. Sometimes you get a bolt of something and out it comes. I said, don't laugh, "master, may I have your grace?" That saying has become a touchstone in my life.  Grace was the foundation of the whole thing and it still serves me well.  I'm a bit flippant about all this, but in truth, a lot of it "woke me up" in a  primal way so there is a core of real spiritual growth as a result of all this.

Anyway, he looked at me, slightly smiled and actually poked his right hand Indian companion (they were call Mahatma's) in the arm and they both turned to me and with what seemed to me, an expression like you would give to a child asking an obvious question.  He said, Yes! No matter who he was or what was actually going on here, that was it, one tiny little word and I then never had one single doubt that this trip would be anything but safe and I would be taken care of every step of the way.  And that's the way it was.

This is unbelievable: this journey was taken with one pair of colorfully patched bell bottom jeans, one pair of linen pull-string pants, the blue turtle neck sweater from the Swing Club job, two very hippy tapestry tops, a pair of those little red, embroidered Chinese slippers and a pair of camel suede wedges. That's it!   I didn't own a bra, but I think I must have had underwear...?

That is how I boarded this plain and took my 1st class seat.  No one blinked an eye.  Rich hippies were doing all kinds of wacky things in those days, spending daddies money, and I think that's the only time in my life when I was mistaken for someone of that ilk, and oddly, in tattered clothes!

Side note:         Think what you may, and you may think this is time to get off the train, but both I and M at one point turned to look out the window over the ocean of clouds ...and saw him.....both of us, sitting on a cloud floating along with the plane.  He smiled, big time, and waved. Of course we waved back, silly. We kept looking away, no,no it's not...no, no! Look out the window again...still t h e r e, cue spooky music or more appropriately - Led Zeppelin Stairway to Heaven.  God, I wish I knew how to embed Youtube videos...but go there, right now, it's so appropriate!
And just so you can think I am a little more wacky than you already do...I've had 4 of this type of experiences in my lifetime...it could happen! 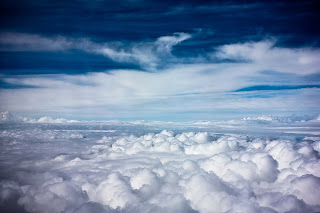 In the picture on right, note bar on lower level in the center of the picture and the winding stairs to top. This is what white glove service was in those days: full menu breakfast, lunch and dinner, some of it cooked in situ, there was a station just behind the bar.  French pastry trays, chocolate and champagne upon arrival, full bar with bar tender, up and downstairs both, seats into warm and comfy beds, warm washcloth's. I could see myself living there. Only one exasperated looked from the stew., we were probably acting like idiots. 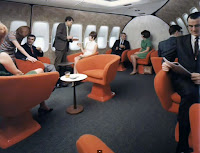 All I remember of being in the second story lounge (that's were that winding stairs came in) was spinning around and around in those chairs with a cocktail in my just turned twenty (so I was only as mature as a 16 year old) hand and being so gaga I couldn't stop giggling.

There was a month layover, intentionally planned (you can have it any way you want it with a "lifted" ticket) in London. I could go all through that but it's too long, except to say that now I know what a dale is and that M, my flying companion, lost her sleeping bag so I shared my, single!, sleeping bag with her for 4 months...!  The only saving grace was that she was even smaller than me and didn't snore. Somehow we remained friends through the whole thing...gawd!

Landing, and the wall hits you...the scent of India! Cow/people shit, food! (banana's, they smell and taste totally different there) garbage, incense and that separate unidentifiable, all embracing and exotic scent that is the essence of India. It smelled like home, that's the only way I can describe it, I felt like I had come home. We had to hire a "taxi" (100 mile an hr. tin can) and try to find our way to the camp ground where we would be staying for a week.
400 people divided between two tents. A sea of sleeping bags that looked like a colorful patchwork quilt. No room to walk between them. Quiet and clean and, miraculously, stayed that way. Huge pit latrines with two 5ft. lengths of board for standing or squatting. Never fell in once, folks. Another miracle. 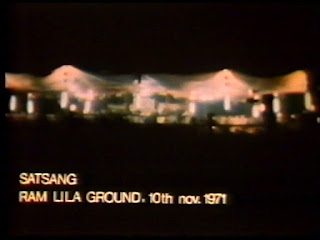 Hard to tell in that photo, but those were the tents, someone got a photo and put up on Google. For about a week we sat in the blazing sun, on the ground listening to Satsang, look it up. The only thing I specifically remember (I wish I could remember the food - that would be fun), was that on an early evening in the midst of that sea of people, (it wasn't just 400 Americans, it was thousands of Indians too)  I turned and saw Baba Ram Das, author of the bible of spiritual hippydom, standing to the side.  My eye had caught him because he was the only person standing. I then got up to go over to talk to him, what the fuck was I thinking? but he was like a magnet I couldn't resist. The people around me yanked me back down because it was taboo to get up when there was a speaker so I never got to ask him, "just how the heck are you doing with the whole acid, LA, India thing?" I'm sure he would have loved to engage........!

Finally, on to the ashram in Hardwar, Prem Nagar, a two story sort of but not really falling down pink elephant (nothing to do with that other pinky guy), which would become my new home for 4 months.  Yippie!

No glass in any of those window. Eyes stung by mosquitoes first week there, so swollen they could not be opened for three days.  I had to be guided to the latrine..again, good times! 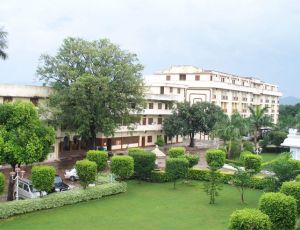 Today - breaks my heart that all the sweetness and simplicity of that time is gone. Life moves on. 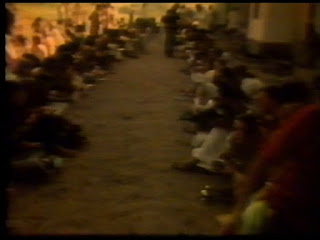 "Catered" meals on banana leafs - slap it down.  I never got sick, until the end where we spent two days in a western style hotel eating "American" food.   Never do that!

We spent, about 4 friends and I,  most of our time in the small, charming places with about a 5 mile radius (big adventures!) like this

this next one is vintage, but it is so much like it was then. Things had not begun to change yet in India, I don't think I would recognize it anymore. 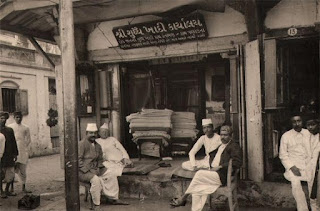 We just saw typical everyday life there. We weren't interested in all the big tourist places so I did not even know this existed until a few years ago. 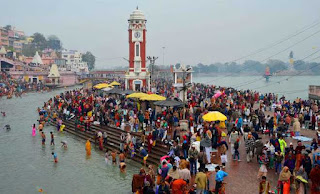 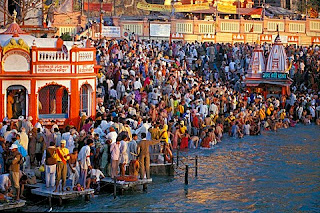 It is Ganga Aarti, where people go to bathe in a special ceremony. This kind of thing was not my India.  This was 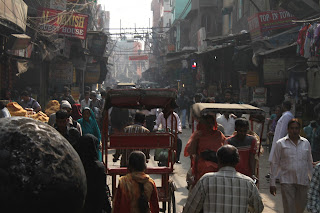 and you got to these little places by walking down these quiet roads that lead to chaos. The lovely chaos. 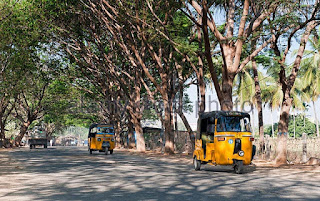 And I am so glad I got to be there at that time. You can still find places like this but they are so overtaken by tourist's now. I guess it's like they say - "you can never go home".

OK, that's enough. Next chapter: The cockroach train, the Taj and smuggling drugs     !!!

*all these photos were taken from the web, no copyright infringement is intended