I don't know whether this is narcissistic, self indulgent, silly, or maybe brave.  But, believe me, it does take a bit of guts. And I been trying to work up those guts for a long time.

So let's see what lighting can do :; (I don't know which one is right, comas so confuse me) 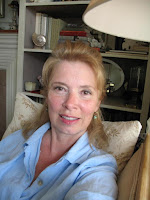 This was me six years ago. I was pretty proud of that picture, I worked really hard to get it, seriously - maybe 20 photos, but I only slightly, slightly thought that anyone else would like it.  I was still a bit agoraphobic at that time and I think I put it up on one of those dating site things - of which I never responded to one single "hello" thing because I simply could not keep that smile up and basically I hated men...for good reason and duh, I wasn't going to leave the house anyway.  So I have no idea why I went on one of them?? (except that my daughter probably told me that I should - it would get me out of the house) I haven't had a date for 26 years....hahahah, I'm quite fine with that :)  I think I could now call myself a virgin. 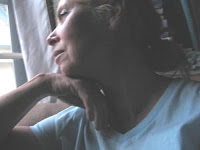 This is one of my favorite photos of myself. At the time, I thought it was terrible. I was actually a little ashamed of it. It was taken in 2011, 5 years ago, and besides my daughter, I have never shown it to anyone.  I had at least 2x as much hair then as I do now. I loved my hair. I miss it. I was gazing at my garden. I loved my garden. I miss it. I had no desire whatsoever to go anywhere....except out to my garden.

This was me yesterday afternoon. The room was a little dark so I used a flash. (and I'm actually trying very hard here to look like I'm "normal") It started out as a pretty good day. And actually, it sort of ended up pretty much that way. Quell suprise !

This was me this morning. Yes! Even I am not stupid enough to think that it's not good. It's like fucking magic!! I am much more comfortable with blurry pictures, I think they help everybody! Somehow everyday I get up and for a little while (before I look in the mirror) I always feel like nothing has ever happened before this day and I'm glad for the chance to start again. I only have mascara and a bit of lip gloss on.  But I am super vain. (that's another word for insecure :) But I've never really worn any more makeup other than that.  And once in a blue moon I will go out with nothing on, although the first time I did that I was petrified. I do have moments now, in my past mid 60's,  finally, where I don't give a shit. I don't really want to know anyone...ha! I don't really want to talk to anyone, except kids and really old people. And, of course! dogs.


Sorry folks, I took it out, I just kept thinking about
it too much.  I think that outweighs the courage to
show it, so we take things in steps and we have to take
care of our mental health, that takes courage too.


Above, good lighting, now bad lighting.  This was about an hour later. I was pretty sure at that point that I was going to write this today..so I was getting kind of scared. And that lump at the bottom of my throat is a nodule on my thyroid as a result of radiation from breast cancer.  It really bugs me.  It looks like a golf ball going up and down when I swallow. 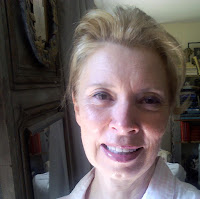 Good lighting. This was my birthday picture. I was going to put it up, but I was too shy. That makes me cry.

Ditto for this one too.
I think sometimes I try to prove something to myself at the expense of myself.
It does not actually help the healing.


This is me tonight, early evening. I get weary. I get tired pretty fast. By the very end of the night I will look like I have had a hard time, a hard life, like a lot of bad things have happened before this day and some of them are biting at my heals. I am giving it my damndest to smile. I really don't feel like it. And when I look at this I really miss my hair. As I age, it gets thinner and thinner.   We are all insecure about something, men included. I'm beginning to feel disheartened at about this time of the evening.

By the time I wake up in the morning I look like my 86 yr. old mom before she died, it truly scars me to see her face in the mirror. The nights just ravage me.  (if I ever come stay overnight at your house you will have to give me lots of support in the morning ) You think I'm exaggerating about that morning face?  do NOT underestimate me!  Someday I'll have a martini  and get the guts to show it but it won't be any time soon. And no, I'm not kidding here - it really disturbs me, it looks very wounded, exhausted with it all.

I have been severely criticized for a lot of my life about my looks, so I have always cared very much about how I look. I was told by my mother that I was a wallflower when I was young.  She used to say, "you may be a wallflower, but if you only smile people will like you" - yeah well, that'll do it! And my father, you don't want to know the names my father called me, even though I was his "favorite". I also have been criticized by a lot of boyfriends and two husbands, sometimes in anger but not always, just that little picking apart of who you are, it takes a big chunk out of you.  It might be becoming a bit more clear to you by now why I am writing this.

(In the telling of my stupendous and hard-to-believe (which is absolutely fucking true, every moment of it) memoir of my trip (read the post below) which will be continued after this post,  I want to make it clear that I was obsessed during that trip with thinking that I was that wallflower, plain as mud.  How I could think that in the midst of all the wonderful people, the love and all the incredible experiences I had and why I could not overcome it I do not know.)

My daughter says that I have a bit of body dysmorphia, ugggh.  I'm getting better now that I am approaching the last quarter. But I don't think it will ever really change and that is what makes me fear aging.  Well that and incontinence.

an aside...someday I am going to write a post dedicated to lipstick. I love it.  Women have been wearing lipstick for just about as long as there have been women with lips.  It's fascinating!

Anyway, I've always wanted to write this post. I'm not looking for any compliments, we only see ourselves the way we see our selves so I would not believe them anyway - don't waste ink.  Some of us think about our looks a lot and some of us don't very much, but we all think about it sometimes and we all deal with it in different ways. And we are all just a little bit insecure about it, if we are honest. Now that I have written this post, I will never have to write it again and that is one less thing that I will have to carry.

And by the way, I rarely, so rarely, ever see someone that I don't think is beautiful. I am an artist and there is hardly anything or anyone on this earth that I, truly -  truly, do not think is beautiful - except, sometimes, me.  I think there may be a lot of people like me. 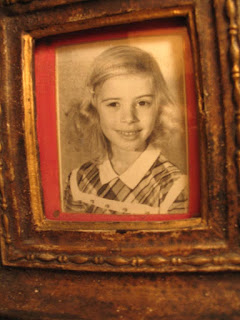 me six years old, first grade
this, I know, is beautiful